I have just finished Dr Fern Riddell’s book  ‘Death in Ten Minutes‘ about forgotten suffragette   Kitty Marion.  Riddell’s book reinforced my  opinion that the action taken by some suffragettes was terrorism – I concede my argument is controversial.   She refers, briefly, to a bomb exploding in April 1913 in a train in Davenport Junction, near Stockport.  The modus operandi employed by militant suffragettes was to fill a metal canister with explosives and place it under the seat of a train carriage together with firelighters soaked in resin and oil  then soak seats and carriages with paraffin.  As reported in a contemporary newspaper, the  canister exploded when a London train was passing and according to the driver (I love this detail), ‘A piece of wood struck his engine and knocked off  his tea bottle.’

1913 was the height of the suffragettes ‘Deeds not Words’ militancy and I wondered where my Miss Muriel Matters was at the time – see my previous blog.  She had, after all, been in Manchester in 1908 so was vaguely familiar with the area.  However,  there’s no evidence Muriel, unlike Kitty, belonged to the active branch of the suffragettes especially as Muriel was a member of the Women’s Freedom League, a breakaway group from the control freakery of the Pankhursts.

A quick blast through the British Newspaper Archive took me to ‘The Common Cause,’ a suffragist journal first published in April 1909 as  a mouthpiece for the National Union of Women’s Suffrage Societies. Muriel was scheduled to deliver a series of speeches and talks in Scotland in late April 1913.  A former actress, she would have been brilliant addressing a crowd and, indeed, the Bexhill on Sea Observer described her in 1911 as speaking with eloquence, a ‘graceful figure in white‘ … ‘possessing a storehouse of knowledge which few young ladies of the movement could rival.’   Somewhat patronising, yes, but it sounds like the unnamed journalist was impressed with our Muriel.

As for Muriel being responsible for placing a bomb in suburban Stockport in 1913, I doubt it.  I’d far more likely place it at Kitty Marion’s feet…

Finally, a photo of Manchester’s 200th anniversary commemoration of the Peterloo Massacre.  Unlike 1819  when the 16th of August was a fabulously hot summer’s day, the 16th of August 2019 was not!  Holding an umbrella and camera was difficult…

Why have I hooked this on at the end of today’s blog?  Because of the many similarities between inequalities in the UK for 1819 and 2019….   A battle I am sure both Kitty Marion and Muriel Matters would have embraced. 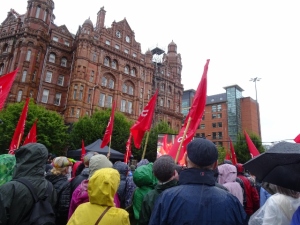 In the current political turmoil, today’s topic is by-elections and concerns a previous resident of my South Manchester home, staunch Conservative voter Francis William Johnstone. Aged about 40 in 1908, he unexpectedly found himself swept up in feminist politics.

April 1908 and Manchester was holding a by-election.  Three candidates were in the race and their nominations meeting was held in Manchester Town Hall on the morning of 21st April.   You may have heard of Winston S Churchill (1874-1965) – he was standing as a Liberal.  His rivals; William Joynson-Hicks (Conservative/Unionist) and Dan Irving (Labour/Socialist).  Attending this meeting and supporting  Mr Joynson-Hicks and was my  Francis William.

Suddenly, two women, members of the Women’s Freedom League (founded 1907 as a breakaway from Emmeline Pankhurst’s WSPU) demanded to know if they could submit nomination papers for women. Of course Australian actress Miss Muriel Matters (1877-1969) and Mrs Manson were refused. Mrs Manson demanded why not.  Churchill ignored them.

When Francis William returned home, did he tell his wife about the interruption?  Was he furious or sympathetic to the cause?  I suspect not. Francis must have been reminded of his encounter just a few months later.

On 28th November, Muriel Matters and fellow conspirator Helen Fox hit the national headlines by chaining themselves to the grille in the Ladies Gallery of the Houses of Parliament.  Their confederate Violet Tillard lowered a banner down to the Chamber.  Unable to release the two women, they were carried – still attached to the grille –  to the committee room finally released by sawing through the chains.

I would love to know how his wife reacted. 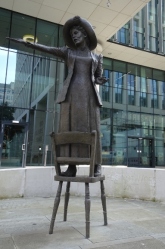 Emmeline Pankhurst statue in St Peter’s Square, Manchester. As a suffragist not a suffragette, I am no fan of hers.  © Adèle Emm