I have written many times about the oftimes unfortunate life of my ‘non’ ancestor Walter Thomas Emm/s tried and acquitted of the 1860 murder of Mrs Emsley in Whitechapel, London.  We resorted to DNA to prove  his descendants were related to my branch of the Emm family – and they are. 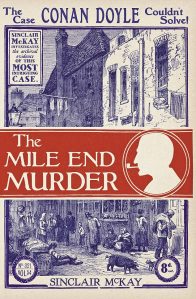 This cause celebre covered thousands of column inches in The Times  from the discovery of the body in August to the public hanging of the ‘culprit’ in November. In 1860, the justice system was more interested in solving a case than ensuring they hanged the right person so, faced with an Englishman (Walter) and an Irishman (James Mullins), it was obvious who’d cop for it – especially if the Irishman had diverted attention from him by framing the other man…

Although more than 20,000 people flocked to Newgate Prison for the public hanging where leaflets and poems were published celebrating the event, some were unhappy with the verdict. Forty years later, Sir Arthur Conan Doyle, creator of fictional detective Sherlock Holmes, was amongst them.  He re-investigated the evidence, such as it was, and came to the conclusion it was the wallpaper hanger.

Now a book has been published titled ‘The Case Conan Doyle couldn’t solve, The Mile End  Murder.‘  Written by journalist Sinclair McKay, it attempts to unravel who really done it and comes to another conclusion.   I will not write a spoiler but, as an aficionado of whodunits plus a vested interest in Walter Emm about whom I had fondly hoped  to write my own novel, this book published by Autumn Press, 2017, recounts the story.