I started researching my family tree when I was in the 6th form.  Wouldn’t you with a surname like mine? 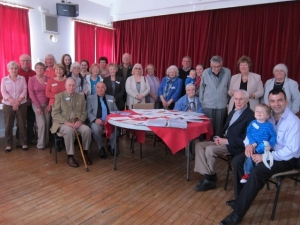 My family knew nobody called Emm apart from my uncle and his family. In the London phone book, there were 5  Emm families – we knew none of them and were too timid to phone.  The magic of genealogy means I now either know them or know who they were. They were all my cousins although we had to resort to DNA for one London branch which ultimately proved that, some ten generations ago, (circa 1750?) we have a common ancestor.  We have disconcertingly similar physical attributes; a long thin nose is quite common.

What’s amazing is that the 5 other families had the same desire to phone us.

25 May 2019, Jubilee Hall, Bratton, Wiltshire.  2-6 pm. Emm family trees. Emms and the 1939 register.  Walk around Bratton which is where the Bratton Emm branch hail from.

26 May 2019, Broad Chalke, Wiltshire.  Emms have lived in the village of Broad Chalke from the early 18th century. There will be a walk around the village and lunch in the local pub.  TBC.

Please contact me for further details of meeting places and times.

Emm has an uncertain derivation.  Online and printed surname dictionaries suggest  it comes comes from Queen Emma of Normandy, William the Conqueror’s great aunt, who married 1) Ethelred of Unready fame (his actual nickname was Redeless) and 2) Cnut of ‘holding back the tide’ fame.  I don’t like this theory simply because we would be called Emmerson not Emm.

A different theory suggests, alongside Amies (like the dressmaker), Amis (as in writers Kingsley and Martin), Ames and Eames share family roots from the Norman Invasion possibly from Exmes in the Orne department of Normandy.  I don’t entirely go along with this but I’d be more inclined to accept it for Emms in Norfolk because of the s at the end of the surname.

However, as a writer, being distantly associated with Kingsley and Martin Amis somewhat appeals to me.  As to the suggestion that I, a very sloppy dresser, could have anything to do with Hardy Amies, the Queen’s couturier – that makes me laugh.

Sir Henry Emm, Stranger Knight of the Order of the Garter

Sir Henry Eam/Em was a stranger knight in the original line-up of the Order of the Garter founded by Edward III in 1348.  He’s believed to have come from Brabant in the Low Countries but very little is known about him.  His Wikipedia entry is at https://en.wikipedia.org/wiki/Henry_Eam where you can see a rather natty medieval portrait of him alongside his coat of arms.  As a founder member, his arms are incorporated into the ceiling of St George’s Hall, Windsor Castle.  Sadly, as Henry is not known to have had any children, we can’t be descended from him.

We can trace our tree back to the late 15th Century.

If you know of any other famous Emm/Emms, or are interested in your surname, please contact me via http://one-name.org.