How did your brickmaker and bricklayer ancestor work?   Old practices from today’s world…. 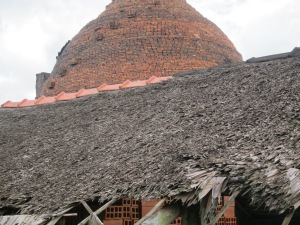 A Mekong Delta family run brick-works; the thatched brick storage are in the foreground and the beehive kiln behind.

When the Romans occupied Britain, bricks were the building material of choice.  When they left, bricks fell out of favour and it didn’t take long for the technical know-how to disappear. During the late middle ages, anyone who wanted to build a house in brick, had to import bricks from the Low Countries, ie Belgium and Holland.

From 1515, Cardinal Wolsey began to build Hampton Court Palace in red brick.  In a brave (but misguided) attempt to improve his relationship with Henry VIII, the fabulous palace was given to the King.  Brick regained its popularity for the fashionista whilst Wolsey lost his head.

Brick-making is a localised industry requiring a plentiful supply of raw clay, water and fuel. London had everything and became a brick-making centre. The Mekong Delta, Vietnam is another with family run brick-works lining the river and extracting silt for the bricks and using rice husks for fuel.

A family run brickworks in the Mekong Delta. Bricks are stacked in front and the beehive kiln – just like those used in Regency England, can be seen behind. 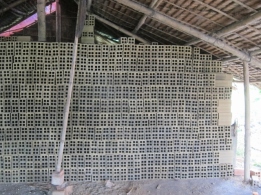 Freshly made bricks drying before firing in the kiln. They will shrink during firing.

In Britain, clay was dug up in autumn and overwintered. The following spring, stones were removed, clay kneaded, water and sand added and the concoction hurled into brick moulds always larger than the required brick size because clay shrinks in the kiln. Machines were invented during the Brick Tax (1784-1850) and here you can see the Mekong Delta version.  For the history of bricks (independent site) click here.

What  did they use for fuel?

Our ancestors used what was local; initially charcoal (made by nomadic charcoal burns setting up camp in forests and which burns at a higher temperature than wood) and then coke (from circa 1709) which initiated the industrial revolution.  The Mekong Delta is no different, they use locally supplied rice husks, a natural waste product when preparing rice for consumption. Huge factories for preparing, bagging and transporting rice husks line the river. 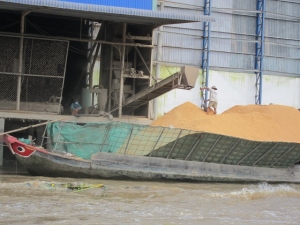 Lining the Mekong River are huge factories for preparing, bagging and transporting rice husks to be used for fuel.

Inside the beehive kiln

Freshly moulded bricks must be dried for several weeks before firing.  When ready for firing, they are stacked in the kiln and fired for several hours (if not days) and left to cool before removing for sale.

For brick-making demonstrations closer to home, try Bursledon Brickworks in Southampton, the only steam driven brickworks in the UK or Haverstraw Brick Museum in New York State and, of course, read my book for more information about brickmaking and bricklaying.

For more information on brick-making and bricklaying, buy my book Tracing Your Trade and Craftsman Ancestors.      Click here     (Pen and Sword)  or  here  (Amazon).

For Researching for the Media; Television, Radio and Journalism  click here.

A temple in My Son built of clay bricks.

Constructed between the 4th and 13th  Century from red clay bricks, and largely destroyed during consecutive occupations and wars, is My Son, the ancient Champa holy royal city in central Vietnam.   Instead of cement or mortar, the sealant used to  bond the bricks together is a wood resin from trees.  Acting like glue, this resin, unlike mortar or cement,  has not deteriorated over centuries and the bricks are stacked impossibly close together.

Detail of bricks at My Son showing the size and how close together the bricks have been laid. The resin acts as a type of glue.

In order to preserve and repair the site, archaeologists have unsuccessfully tried to recreate both bricks and resin but no modern attempt has yet devised a brick or resin as resistant to the heat and typhoons of this area.  As advanced technologically as we believe we are, the original builders have proved there are elements of knowledge of which we are still ignorant!

The bricklaying style here is Flemish Bond where stretcher and header overlap.  One of the oldest forms of bonding it is still the most common today.

For further information about My Son, see the UNESCO World Heritage site here or Wikipedia

For more information on brick-making and bricklaying, buy my book Tracing Your Trade and Craftsman Ancestors.      Click here     (Pen and Sword)  or  here  (Amazon).

For Researching for the Media; Television, Radio and Journalism  click here.