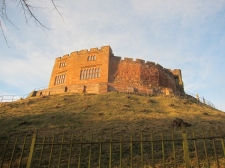 Do you fancy this?  Fabulous estate-agent lingo for – guess where?  Tamworth Castle.  Yes, you too could be ‘Lord of the Manor’ in 1861.

Originally built circa 1090 as a motte and bailey castle possibly by William the Conqueror’s steward Robert de Spencer  (an ancestor of Diana Spencer aka Princess Diana), it was owned by a succession of families; the Ferrers, Shirleys, Comptons and Townshends.  In the middle of the eighteenth century, the Townshends updated and modernised the castle (which meant making it look older and more fairy-tale like!) spent a fortune and, in a nutshell, by the middle of the nineteenth century, had to rent it out.

In 1861, 42 year old gardenerJohn Asbury and his wife, Jane, both Tamworth born, lived here. Their neighbours were a motley bunch of horse drivers, cotton weavers, servants and coal miners – not at all the upper echelons of society… 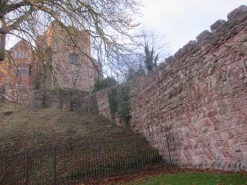 The Cooke’s were definitely kings of the castle. © Adèle Emm

Fast forward ten years and the tenants were  the Cooke family.  Thomas, a 50 year old widower, was a wholesale clothier and landowner employing 1000 hands. Living with him were his four children plus footman, cook and housemaid.  His neighbours  down the hill were not-so-toffee-nosed miners and coachmen.   In 1881, Thomas is still slumming it up at the Castle and the records are more enlightening and certainly easier to read. Aged 60, he is a tailor and clothier ‘employing 650 hands and farmer of 220 acres employing 8 men and 5 boys.’    His unmarried daughter and two sons (who worked in the family business) still lived with him and, ministering to their every needs, were the cook and two housemaids.

A clothier, by the way, could either be a glorified tailor, draper, running a shop or a man who owned factories making cloth and/or clothes.  Not having done much research on this particular family, I suspect he owned a large tailoring company.  I would love to hear from any descendants and update this blog.

In 1897, the Castle was sold to Tamworth Corporation for £3,000.  Two years later it became a museum and was opened to the public.  Sorry, but you missed your chance to live like a king. 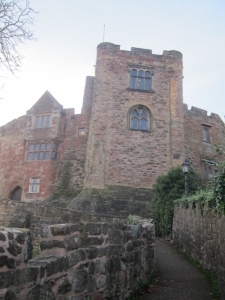 Sold to Tamworth Corporation in 1897, this is now a museum open to the public © Adèle Emm