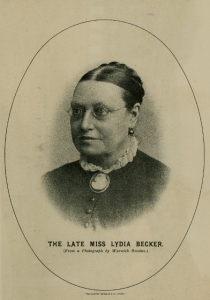 To misquote Hilaire Belloc, son of a suffragist but anti-suffragist   himself , the following excerpt from an  Ode to Lydia Becker will make you stretch your eyes.

In 1867, women had no vote but Lydia campaigned to remedy the situation and was one of the first women in the UK to speak in public.  In response to her campaign,  a self-styled ‘author’ penned this.

Oh, maiden with a charming name,

But with a most unseemly mission,

Why to the franchise lay a claim

When marriage should be your mission?

When prompt to soothe, and not defy, men

And, shy of trusting Mr Mill,

Rather repose their faith in Hymen.

Women were expected to stay home.. Even daughters of wealthy businessmen had a rudimentary education.  A husband legally owned his wife,  her possessions before marriage became his, and should they separate, the children remained with him.  Not only this, but women never went to public meetings except church and she certainly couldn’t speak at one.

Lydia Ernestine Becker, a chemist’s daughter from Manchester (he owned a vitriol works at Middleton Junction on the outskirts of the city), home schooled by a governess and self educated, was amongst the first women in the country to speak in public. And on a political platform no less.  Scandalous!  From her first venture as orator, she travelled the country speaking on female issues at venues as prestigious as the Mechanic’s Institute, Leeds, and Manchester’s Free Trade Hall.

The Second Reform Act was passed in 1867 permitting ‘persons‘ who owned property to vote.  Taking the Act at its word,  Lydia persuaded 5,000 eligible women to enter their names on Manchester’s electoral register.  Sadly, most were weeded out before election day but a handful of names slipped through.   Lilly  Maxwell, a Scottish born widow, was one. She cast her vote for Jacob Bright, the candidate espousing women’s suffrage.    Remember, this was fifty years short of official female enfranchisement.  As soon as the by-election closed, the government reworded the Act and women were banned from voting until 1918.

As can be expected in a world when women were powerless, Lydia was treated with contempt and ridicule for daring to speak in public  especially in support of women’s rights.  Subject to a barrage of vitriol (I couldn’t resist referring to daddy’s trade) she became adept at rebuffing hecklers.

As evidence of how far women have travelled since the 1860s, I have copied part of William Gaspey’s Ode to Lydia Becker published in the Cumberland Pacquet and Ware’s Whitehaven Advertiser on 20th October 1868.   Originally  from London, Gaspey was a bookseller and author living in Keswick.  His wife, Jane, was fourteen years his junior and I’d love to know if she agreed with his ideology.  I didn’t have the heart to copy the entire doggerel; at six stanzas, it was patronising to a fault.

This is how it continues…

Few of the fair sex who are blest

With husbands care a pin for voting:

No dream of suffrage stirs the breast

Of tender wives, or mothers doting:

To them far nobler nursery morals,

And joining in their children’s games,

Than dabbling in election quarrels!

Helpmeet for man was woman made,

To cheer him with her love and beauty,

But when a demagogue’s her trade,

Vanish both modesty and duty.

On platforms, she is out of place,

And meets from law no recognition –

Sweet Polly loses all her grace