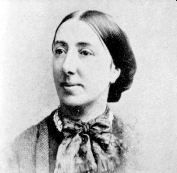 In the year of female enfranchisement (for some) I’m continuing my eulogy of forgotten and clever women who fill me with admiration although I’m sure I would’ve been intimidated should I have met  them.

Today’s is a self-educated woman who could read Latin, French, German, Italian and Spanish and, using a dictionary,  translate Russian, Dutch and Norwegian. I bet you’ve never heard of her.

Eleanor Anne Ormerod, 1828-1901, was an entomologist and scientist who studied insects injurious to crops and became;

She wrote many books and papers, lectured in America and Europe but like so many intelligent women, never married. Her death was reported  in newspapers throughout the country and her estate was worth more than £52,000 – all from the fruits of her own labour and intellect. Go it girl!

Her archives, books and papers are held at the Museum of English Rural Life, Reading University.