Our New Zealand cousins standing outside a house in Bratton, Wiltshire, owned by Benjamin and Grace Emm in 1795

Well, what a weekend!  Thanks to everyone who turned up over two days at Bratton and Broad    Chalke, both Wiltshire.  As I keep reminding everyone, John Emm who married the Widow Rhysse was born around 1482 which makes our family as old as the New World.  Four Emms, my 6th cousins, joined us from the even younger new world, flying nearly 12,000 miles from New Zealand to be with us.  Here are David and Colin plus partners outside a house in Bratton owned by their 4th x great grandparents, Benjamin Emm and Grace nee Dew. 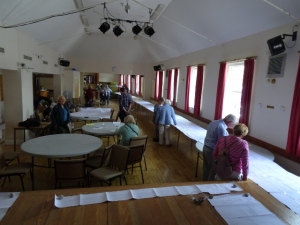 First – an apology.  The main hall in Jubilee Hall, Bratton, is 25 yards long.  Our main tree didn’t fit into it.

John Emm who married the Widow Rhysse has 986 named descendants.   If I’d printed the tree starting with him,  the tree would have been 820 pages and over 4,647 metres long.  When Usain Bolt was the fastest man in the world, it would have taken 4.45 seconds to run!

I didn’t have the time or patience to join up all these sheets.   The tree in this photo  is 580 pages and over 41 meters long (46 yards).   We cut it in half but placing it along the other side of the hall meant no one could use the lavatories unless they jumped over the tree.  Not a good idea when several Emmses were over 90.     As there are other Emm trees which don’t yet fit in, John Emm has many more descendants…

Emms Lane, Bratton, is named after James Emm (1768-1833) who owned the farm at the top of the lane.   Here  are some of us  correcting the punctuation in our lane.

Sunday’s venue, Broad Chalke, is where Emms have lived for nearly 300 years.   Although one of my cousins goes back several generations,  there is a gravestone in the  Unitarian Church graveyard for someone he cannot  identify. Petty Officer  AJ Emm, served on HMS Jamaica and died, aged 22, on the 19th September 1946.   As a member of the Guild of One Name Studies, I am duty bound to research this tragic young man. 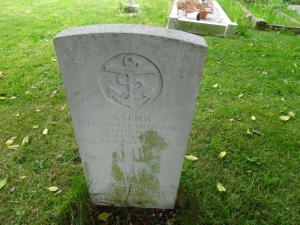 Checking  www.freebmd.org.uk I find Albert J Emm’s death registered in Dartford, Kent.   Albert James was a local boy, his birth registered in Wilton in December 1923. He’s my 5th cousin once removed.   In Knighton, Broad Chalke,  heart broken parents  Albert John Emm and Daisy Eliza nee Holmes brought him home to be buried.  Should I pay for his death certificate and find out what happened to him?

Finally, my latest book, Tracing your Female Ancestors, has arrived in bookshops.   You can buy it via  Pen and Sword  or Amazon.   Within the book are several references to Emm and other ancestors. The ladies on the front cover are all mine. ..    Not the mermaid, of course!